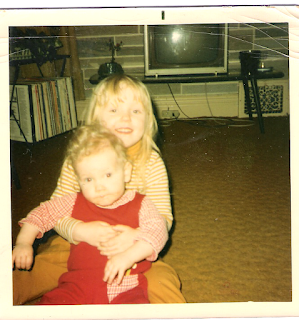 This day rocks and slides around every year. The day in 1969 I gave birth to my second child. The day she was placed in an incubator beside me, I couldn't touch her immediately as her skin was too delicate. In those days there was a long post- natal recuperation in hospital (8-9days) so she was laid out at the end of the nursery beside a huge window, stark naked, below the weak December sun so the Vitamin D could embrace her. Which it did. I read many books and smoked many cigarettes as I recovered. (Smoking in a maternity room sounds impossible now, but yeah, us funky daredevil hippie mothers all did.)

I got to hold her when the sun went down in the first couple of days as I healed and then could go to the nursery and be with her as she sunbathed. It worked. Her skin cleared up.

She was a bright and curious child and when she was in kindergarten she sat me and her father down and asked us seriously if there was a night school she could go to as her days were far too busy for day school. She ran with boys mainly as she found girls far too wishy-washy to her liking as she climbed trees and built a small tree house with the assistance of her far more "proper" older sister. Her seventh birthday, which took place at the Ponderosa Steak House (her choice) had only boys, her gang, in attendance apart from her sister. A cowboy outfit we bought her was worn to shreds on her. She wore her socks with one matching her sweater and one matching her pants or skirt. That made total sense to her. And to me.

She was unique and different and extraordinarily bright with illuminating insights on how the world worked. There was a patch of enormous trouble with her at fourteen when she found drugs and ran with an alarming bunch of teenagers. I didn't deal with it well at the time, I had my own demons. But through Tough Love, a support group for parents which was absolutely fantastically helpful, I began laying down tough rules and curfews and she ran away from home for a few weeks. It was a hellish time, but she did come back (long story), bedraggled and subdued and got back in school and off the drugs, shining in scholarly achievement after the first semester.

She lived with me, just about, until she was twenty-eight. And subsequently back- emigrated to Ireland.

She is currently in the UK. And about twenty years ago now, cut off her entire blood family and her friends here.

So there is this huge chunk of wandering love chopped right out of all of our lives. I understand that not being a mother herself she has no idea of the pain of loss I and her father suffer. Or her sister and niece.

It's like missing a limb. And the phantom pains never leave.

Posted by Wisewebwoman at 12:10 PM