I'm making good progress, I'm in Antigonish, Nova Scotia, not too far from Sydney, from where I'll take the ferry to Newfoundland late tomorrow night.

Weather has been kind, just a slight drizzle later on in the afternoon.

Thoughts from the road:

Why on earth are there so many trucks? Are we out of our minds? One truck and driver transports so little compared to a freight train which could cart so much more with far, far less environmental impact (fuel, road wear and tear, danger, etc.) I thought then of the resultant unemployed truck drivers. Perhaps they could be employed in rail maintenance, or as station agents, who knows. But the trucks need to be removed, this is so clear to me. At times in the last few days for a few miles of highway it was just me and twenty or so trucks. I counted. One gets bored on the road ;^)

Is it just me or is there far less variety in shops these days? You think there's variety but if you look closely all the drinks and fruit juices and water are Coca-Cola and the snacks are Frito-Lay or Cadbury Schweppes Powell. They sell the illusion of choice. And the stuff is rubbish, no taste to any of it. And so few places on the road carry fruit or vegetables.

Heard in a restaurant in Nova Scotia today:
"No, we don't carry bottle water anymore." YAY and AMEN. But then again, Nova Scotia is the world leader in recycling. 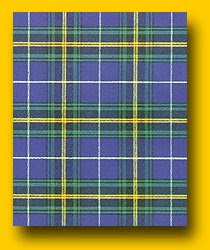 Pipers and kilts prevail here and can be seen sometimes, at a distance, patrolling the beaches as they practise their notes. Nova Scotia's own gorgeous tartan is everywhere, the pride in the homeland is palpable.

I've had my fill of clams and Digby scallops in the last few days and I hear there are boatloads of lobsters ready for the eating and the price is cheaper than last year.

Nova Scotia has had its share of tragedies, too, mainly related to the coal mines. There have been many appalling disasters over the years.

I leave you tonight with what I believe is the most powerful mining song ever: Working Man.
Written and performed by Rita MacNeil (in honour of her father, I think) accompanied by the Men of the Deep, the famous Nova Scotia coal-miner choir.


I dare you to have a dry eye at the end of it.
Posted by Wisewebwoman at 9:13 PM