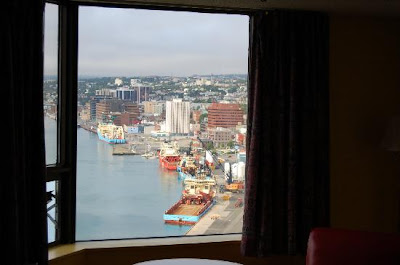 View from my room.

I’m in the Heaven of HighSpeed. Safely ensconced here for the night, off at the crack tomorrow to fly to Toronto and Da Fam & Fwends. I’ll be there for a couple of weeks safe in the bazooms of loved ones.

I had the Doldrums of Dial-up Dementia (I’m looking at YOU, Government of Newfoundland & Labrador and I’m not going away until you fix this outrage) for the past 5 months and at times I nearly went mad. In the middle of research, d-i-s-c-o-n-n-e-c-t without warning, uploads taking 30 minutes when normally it would be minute. Downloads the same. Very, very difficult to run a business. I think it takes twenty times longer and my head feels like it's exploding. Not to mention writing a blog, loading up pics or watching YouTube. Facebook is painful and I tend to avoid it as everyone’s albums are so tempting but what takes you 5 minutes will take me 100.

BTW: If you’re ever going to book a hotel, don’t go directly to the hotel site or call. Book through Expedia on the net. About half the price. Seriously.

We had the Prince of Wales and the Duchess of Cornwall here for about 4 days. One of our outports will soon be celebrating 400 years of British Settlement. Quite a ho-hum reception, apart from the pols tripping over each other. In some areas the security outnumbered the actual audience. H1N1 virus fear was part of it, but in general most feel the monarchy is irrelevant. I’ve always liked Prince Charles, didn’t much care for Diana, I feel he has come into his own since the shadows have been lifted from Camilla. Here he talked green and environment and military and architecture - his passions - and enchanted the school children.

Which brings me to the secret service sitting at the table next to me at dinner tonight. I pretended to be reading while listening. A favourite hobby of mine. There were three: one woman, two men. The woman was from Newfoundland originally, the men were from B.C. and Quebec. They had met only through this detail and were going back to their rooms later to write up full reports (the royal couple left late yesterday). I loved the feeler bits of the conversation, the scratching around to find the common ground. After the first beer, they found it. Fishing. They all fished. But the woman’s stories were astonishing. Her father had employed her on his boat in the summers in her university years. Her biggest catch had been a 380lb tuna which still held the record in her fishing family. She told of landing a shark which she thought she’d killed but when she was taking a picture of her uncle with his hand on the head it turned and snapped at his arm which involved a tourniquet and him being lifted off the boat by helicopter after a mayday call. It took 80 stitches along with staples to fix his arm and hand.

Dining alone sure can have payoffs.
Posted by Wisewebwoman at 8:45 PM