Report of a Day in the City 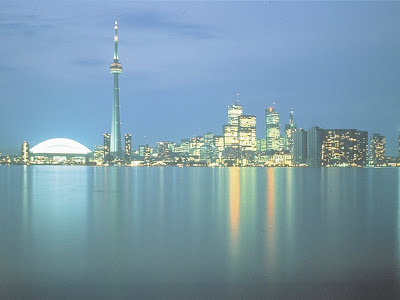 Yeah, I'm there. I'm in the groove again (do they even use that term anymore?). She's back. City Woman.

I had breakfast with the grandgirl. Rare. Very rare. She is a going concern. for her to cook us waffles before school and sit down across from each other and eat, in the morning, well, amazing. She is fifteen after all.

Then it was on to meet my blog buddy Annie for lunch. Neither of us had ever done such a thing before. Meet, in the flesh, another blogger. A first. It was wonderful. Well over two hours chowing down on some great Thai food and nattering of families and travels and the east coast and the west coast and Canada and politics and grandchildren, well, you get the picture.

Then I decided to walk downtown from where we were, along Bloor Street and down Yonge St - the longest street in the world. 1896KM. Ha! - no, I didn't walk it all but did cover what my father could have called a goodly hike.

Memories get stoked. Of working in this area back in the sixties and seventies in office atmospheres similar to those described in Mad Men. Seriously. It amazes me that Mad Men captures that era so well. I lived it. In the office buildings on Bloor Street.

And then, and this makes the city soooooo worthwhile, it really does, a friend treated me to August:Osage Countyat the Canon Theatre. 3-1/2 hours in the theatre that fly like 10 minutes. Theatre so good you never want it to be over. Estelle Parsons at 81 giving the performance of a lifetime with a supporting cast that never puts a foot wrong.

I was spellbound. Entranced. I love the city.
Posted by Wisewebwoman at 1:15 AM