Separation of Church & State Much? 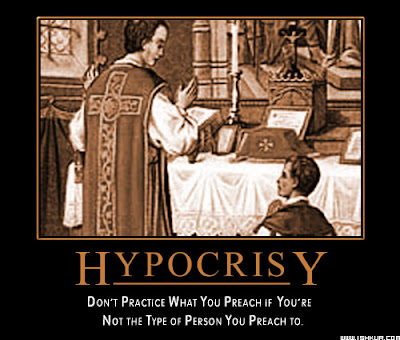 Moral high ground=Roman Catholic Church and it's now putting all its considerable bullying power into ensuring the citizens of the US are not all treated equally.

Well, Catholic laymen are treated equally as long as they’re heterosexual of course. The males of the cloth can be of either persuasion. Mainly homosexual as it appears that a higher than average percentage of them died from AIDS in the eighties. 4 times higher than the general population as a matter of fact. But lay Catholic homosexuals or LGBTs are not entitled to marriage or child adoptions or child fostering.

And as to female Catholics? Don’t get me started on the second class citizens who can’t participate fully in its machinations with not even rights to their own bodies. Whatsoever. Particularly when it comes to breeding. No matter how brutal and reprehensible the inpregnation or the age of the female. And the piece de resistance was the church’s threat of excommunication for all involved in supporting an abortion following the rape of a nine year old girl by her stepfather. It seems their hypocritical advocacy for the rights of children ceases when the child exits the birth canal.

And I haven’t even touched on the consistent and pernicious paedophilia which has been rampant in their ranks for centuries and is only now seeing the light of day.

By its very nature the church attracts the sexually dysfunctional and deviant. Who call the shots. Who hold sway over the legislation of the US government.

And no one is calling them out on it.

No, instead they wield enough influence to affect health care coverage for those deemed not quite human or equal. The poorest, most marginalized and most needy.

Whatever happened to “the meek shall inherit the earth’?

Whatever happened to the separation of church and state?

And hark! that faint, oh so faint whisper of "liberty and justice for all"?

PS I have previously posted on the Catholic Church here in these posts.
Posted by Wisewebwoman at 1:47 AM