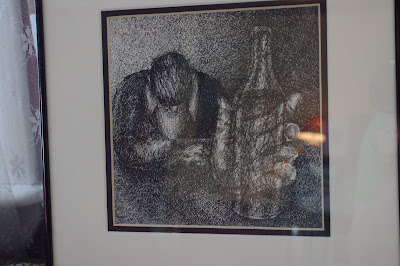 The news was already there when I got up this morning.

Harry* set out to drink himself to death when he was only thirty after the wife and daughter left him and the only one who could put up with him was his mother.

And then she died five years ago. And the family home started to fold in around him. A light fell off the ceiling, a toilet leaked. Furniture collapsed. Newfoundland Power cut off his electricity and the wainscotting hung off the walls. Floorboards went missing - used for firewood, more than likely. From the outside of the house you'd never guess of the devastation within.

It got so bad that someone lent him a camper and he moved into this, parked on his own driveway, with his dog and a kerosene heater. Things worsened and Health Services were called and they moved him into a unit in a senior residence which he proceeded to destroy. His dog was taken by kind neighbours and is a playmate of Ansa's.

Health Services tried to get him admitted to a detox and rehab programme but he would get belligerent. They called the wife and daughter to try and force the issue to no avail, they had washed their hands of him.

He weighed 300lbs and was completely yellow in appearance when he had a stroke 5 weeks ago. They managed to dry him out in the hospital during his month's stay and his residence was fumigated and cleaned out while he was gone. He was told if he wanted to go home to his government housing unit it would be under the condition that he have a full time personal home care assistant provided by health services .

The assistant started yesterday and brought healthy groceries into the unit. When he left at the end of the day Harry was seen getting into his van and went missing for 4 hours.

He finally showed up around 9 last night, looking the happiest he'd ever been seen, they tell me.

It was the assistant who found him. On the second day of his job. Harry was sprawled on the floor in his living room with his arms open wide, looking like some kind of angel, my friend said. It wasn't long before the police came with forensics and yellow tape and cameras and abrupt words to tell the specators to leave the scene.

My take is suicide.

He was 49 years old and had been trying to do just that for the past twenty years.

*not his real name, but all other details are actual.
Posted by Wisewebwoman at 4:40 PM