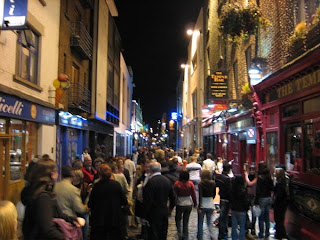 It was a lovely evening in Dublin last night. Gorgeous weather. A fabulous Thai restaurant, with an old friend who had moved back to Dublin 6 years ago with 30 years in Canada under her belt. A move that had its ups and downs but she is fairly settled now. Loads to talk about, loads to catch up on. We had a bit of shopping with us and my knapsack was under my chair and the packages on a nearby chair. We commented briefly when a man on a crutch stumbled against the railing beside us and then moved on.

On coming back from the washroom aboout 15 minutes later I noticed my knapsack was missing, a quick search by staff and nearby patrons confirmed, yes, OMG, the knapsack with my credit cards, medical cards, driver's licence, temporary mobile, about 30 Euro, daytimer, current book, etc. was gone.

We recalled the cripple and his lurch, the restaurant staff played the CCTV and then the manager and a waiter took off down the street in hot pursuit. They intercepted him at another restaurant doing the same bump and grind but no sign of my knapsack. The police had been called in the meantime.

My friend, the dear darling woman, went off to a bank machine and threw all these Euro bank notes on the table to make me feel less destitute (how was I going to get cash with no debit card, h'm?).

Next thing, two ban gardai (women police) show up holding my knapsack. Gobsmacked doesn't begin to describe my feelings when a check of the knapsack showed everything intact. Yer man had stashed it behind a rubbish bin to survey his loot at his own leisure after he had robbed other unsuspecting customers.

The restaurant refused an extra tip for their prompt action and insisted on supplying us with all the free cappucinos we could handle. The police superintendent arrived to tell me how absolutely incredibly lucky I was as robberies in Dublin are through the roof and these crimes happen so quickly that nothing is ever recovered.

I was photographed with the bag for the records, yer man was hauled off in the paddy wagon and detained overnight as a guest of the state.

My thanks to the wonderful Garda Siochana – 3 outstanding women police and to the incredibly kind and quickthinking staff at Koh who went above and beyond the call of duty.

Luck of the Irish? What do you think?
Posted by Wisewebwoman at 6:50 AM