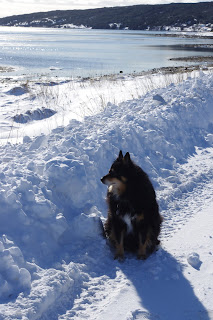 One has to go away. Even if it is for a day or two only. Just to miss it. To feel the lack of it in the bones. Home.

I've been gone for nearly 2 weeks. You should have seen the dog once she saw me, quivering from head to toe. As I do. At first she doesn't believe her eyes. She shakes her head as if to get rid of her waking dream. Then it is as if she shouts:

And then she throws herself on me. Paws on my shoulders, tongue all over my face, hair, hands. Oh, to be so welcomed. Everyone should be welcomed like this. It is worth all the days of being away.

I light the fire. Together, we warm ourselves in front of it. She brushing against my legs. Whining ever so softly. I glance at the couch where my favourite cushion (an aran one, knit by me) looks askew and slightly mangled.

This is what has comforted her. The normally off limits couch and its cream coloured cushion, licked and kneaded and still bearing the faint outline of her head.

She catches my look at the forbidden territory and hangs her head in shame.

It's alright, I whisper. When I'm away, you're allowed.
Posted by Wisewebwoman at 11:05 AM