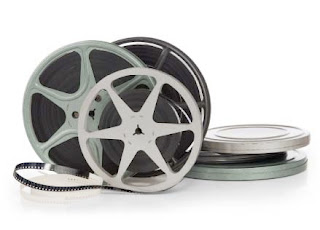 I don't have television so there are no Oscars for me tonight apart from on the web. Maybe it is my age, maybe it is a deterioration in the overall quality of most movies but I view Oscar night now as a long drawn out yawn with too many commercials, a sycophantic host and self-congratulatory side bits which border on extreme narcissism.

I have a lifelong passion for the movies, going way back to when my uncle owned a cinema in a small town in East Cork and I got to see !!free!! every movie he showed. The A movie, the B movie, the newsreels, the cartoons and the serials on Saturday afternoons. I also have quite an enormous collection of movies. Some I never tire of watching.

One of my biggest disappointments of this past movie season was The Artist. I just don't get what all the fuss and hype was about. I found it melodramatic and cliched. And if that was the point, so what. Not a good point pour moi. A close runner up to FAIL would be Midnight in Paris, with an appalling Owen Wilson (attempting to channel a jaded Woody Allen) in the lead and featuring cardboard caricatures of the greatest literary figures in Paris as a supporting cast. Please. I was seriously offended.

On the other hand, I loved Monsieur Lazhar an amazing story of a Grade 6 class in Quebec whose teacher commits suicide. The child actors in it were brilliant. I also loved Beginners which starred Christopher Plummer as a widower coming out of the closet after 45 years of marriage. Hugo was a delight, loved loved loved Martin Scorsese's homage to movies through the ages and even caught his own (a la Alfred Hitchcock) cameo in it. The 3 D effects were incredible.

Tree of Life and Bridesmaids were also in the enjoyable lineup of movie pleasure for me this past year.

But overall a disappointing season but some of that can be blamed on the unavailability of good foreign film showings here in Newfoundland. To my mind, there is nothing like the big screen of a movie theatre for showing such treasures.
Posted by Wisewebwoman at 8:13 PM