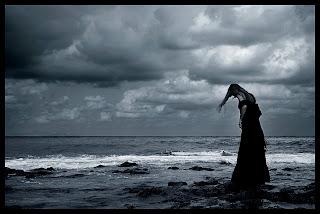 According to statistics, the majority of adults in the USA and Canada now live alone. A fairly new demographic that is just about invisible judging from the media. No one wants to talk about it or write about it, it seems, apart from some fearless bloggers that tread outwards into uncharted territory. My blog buddy Ronni Bennett wrote about it yesterday and she was also featured in a piece in the New York Times on Wednesday.

I wrote about it recently:

Alone.
Sometimes lonely.
Solitary.
Independent.
Selfish, some say.
Why?
Why not?
To choose
The perfect space
In all the world
For one
Such as me.
By me.
Sea.
Old house.
Woods.
Silence.

Posted by Wisewebwoman at 1:19 PM