A Candle and a Coffee and a Journal. 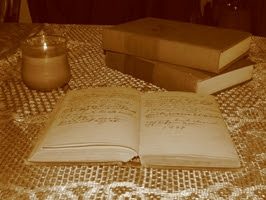 I took these three things in hand tonight and headed up to the Tigeen at the crest of the hill behind my house. I was feeling terribly sad. Loss does this.

We have smog from the awful Labrador and Quebec wildfires which has drifted downward from there, many kilometres. It makes of the bay a magical place. Headlands disappear and the sun does strange things, peeking outwards from the smog and hiding again. A golden glow washes the water followed by a pink bath. Nothing is clear. If I were a painter I would set up an easel right there on the wee deck of the Tigeen and get cracking. As it was, I lit the candle and wrote in my journal. Of grief and loss and what it does to the insides, how it bathes everything in uncertainty, much like the drifting smoke that travelled so far south with the winds and the breezes and the currents of the ocean. Who is to peek inside another's heart?

I came back down to the main house and shared a few bits on Facebook, about the awful fiery explosions in Quebec from the train wreck, loaded with fracked oil. So many dead or missing. Perspective.

And then an old friend from Ontario called. Late-ish. And in the way of dear old friends, soothed my spirit, patted me down, reassured me of my value to her. I so needed that. And I told her so.

Solitude can sometimes be a fearsome thing.

Posted by Wisewebwoman at 11:48 PM