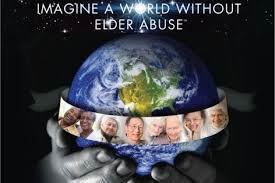 Now and again I forget I'm an elder. Well actually, most of the time. I truly do. I was discussing my elder project with Grandgirl recently and commiserating with her on some of the truly sad stories I have heard from old people when she said: "Grandma but you are an old person!"

Don't get me wrong.

I truly enjoy being an old person. I'm so very fortunate I have my health in reasonably good array. I don't put all my energies, as so many do, into fighting off the signs, the dyeing of the hair, the belly lifts, the chin tucks, the eye-lifts, the $100 anti-aging creams. Not my style - but Namaste if it is yours. Age must be embraced I feel and not denied. Perhaps all this denial is a fear of death. But it will come, botoxed or not, right? I'd rather you saw the ravages of age on my own deceased corpse. Truly.

"There she goes," you might say, "But hats (purple, please) off to her, she lived every bloody minute of it, didn't she? She's all worn out and not rusted out."

Which brings me to this project I've been given due to the play I wrote which covered the same topic. Elder abuse. I won't be talking to elders about this but to schools and other venues around the province in order to shed more light on this pervasive and heart-wrenching subject.

I've been doing the index card thingie to make sure I cover all aspects of this rampant problem in our society. There are far too many index cards. Physical abuse is the least of it.

And as I was jotting down the aspects of emotional abuse(one of the very worst forms in my opinion) on one of these cards, I realized that I, too, have been a victim of this subtle and insidious form of abuse. Some who were very close to me have withdrawn their affection from me. Without rhyme or reason. And it hurts. Badly. The most recent form being when I reached out yet again and was rebuffed, basically, with if I had behaved myself better they might have phoned me but now they wouldn't.

And I only realized this was abuse when I was preparing the workshop.

I think one of the major problems in elder abuse recognition is either the trauma not being recognised at all, or a mindset of such denial for it is deemed far too appalling to contemplate.

I've just proved my own case.

Posted by Wisewebwoman at 2:25 PM