One Sunday Morning in Youghal - Part 2 of 2 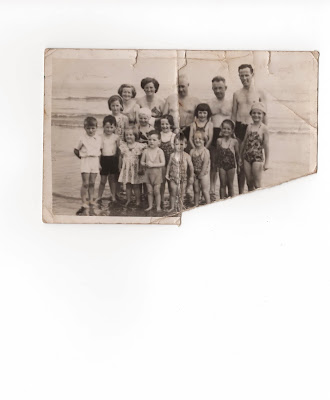 You'll know later why this whole day is so vivid in my head. It's hard to believe today, but the mothers would line up all those pushchairs (strollers and prams) outside the church door so any mewling infants or gurgling toddlers strapped into them wouldn't disturb the holy faithful inside.

Then we all trouped in to the vast, incensed, candle-lit space. The men were all on the left of the church. Us women and boys younger than five? six? sat on the right. My first introduction to segregation of the genders.

The organ thumped, the voices of the choir soared above us, the altar was packed with clergy: monsignors, curates, priests, altar boys, swanning about in lace and damask and gold embroidered vestments. The children on the women's side were restless, holding their whinging selves in, while mothers frowned alarmingly at them, picking the younger ones up and holding them tightly like a strait-jacket if their behaviour looked like it might escalate into an embarrassment.

Toys and entertainment or food were not allowed to distract them. And off-site child pens unheard of. We were in the presence of Holy God and all his angels here below. And you needed to learn young, and fast, that Hell awaited any misbehaviour in His eyes.

All those men crowded fetchingly on the altar of The Lord, crashing their thuribles, loaded with incense, and their aspergills, loaded with holy water to be sprinkled on the unclean. I knew the names of everything. I was one of those “Why” children whom my father indulged. Endlessly. In church, I would recite the long complicated names of everything holy to myself along with their definitions. Today I would be called a geek. It kept me amused through those long bouts of endless Catholic liturgies.

When the ninety minutes were up, the last gospel read, the last blessing in that strange language of Latin bestowed upon all our sinful heads and the last collection taken up by the solemn men of the Holy Confraternity we were free to go. We could hardly wait. All restraint was gone, us children plunged from the church in a mass of arms and legs and whoops, leaving our parents to pull up the rear with some snoring or fretful toddlers in their arms and now rocking the abandoned babies in pushchairs and prams crying outside the church doors.

We raced down the steps of the church, shouting, landing on the footpath, some of us turning to wait for the parents who had promised us ice creams for behaving ourselves in the presence of Holy God who watched us all the time and never got bored.

What did we hear first? The terrible thumps, the screeching of brakes, the screams from the top of the steps, too many screams to count. I turned back to the road. And it was just for a moment but I saw. A pair of legs underneath the front of the car with lace trimmed ankle socks and black patent shoes. And behind the driver's side another pair of legs with grey knee high socks and sturdy boy's oxfords. The legs were very still. The driver's head was on the steering wheel, his hands locked in place on each side. He looked frozen. There was blood, there was lots of blood. On the car, in the road. I felt my own blood leave my head and my legs went weak. A strong arm went around me, a hand covered my eyes.

“Come away, come away now,” my father dragged me off, still covering my eyes. His voice sounded strange, strangled, “ I want you to forget all about this. And remember you have to look both ways before you cross the road. Always.”

Years later, I asked him about it. He was upset I had remembered it. He had tried to protect me. Yes, both children, a brother and sister had died. Apparently they had spotted their grandmother across the road from the church and ran to meet her. They were 12 and 10 years old.

On the previous day, the dead boy had shown my little brother how to do cartwheels on the strand.

Posted by Wisewebwoman at 7:23 PM