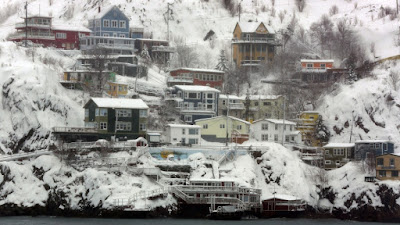 She's early and it may be temporary. I had to cancel long made plans to stay overnight in the country. Daughter stayed last night as she had medical appointments running into late yesterday. She said her MRI at 8.15 PM at the hospital was a doddle. It was so quiet just the cleaning staff and a few others like herself and no waiting.

I told her I'd been unwell on Thursday so cancelled my Joanna who does the cleaning so therefore the kitchen floor wasn't up to Joanna's standards. Her response:

"When did we ever care about kitchen floors, mum, that's why we had dogs!"

"I raised you perfectly, darling," I responded.

So today, I'd been thinking about this blog post I'd written on a relationship I had at work years ago between a holocaust survivor and myself, at that point a practising RC. I thought it could be expanded and fictionalized into a play or a short story/novella, so I began working on that and was glad of the time that became available tonight.

There is snow outside and it is peaceful and quiet. A good time for writing.

I took a break and watched a muddle of a film, Certain Women trying to make sense of it. Couldn't. A waste of an extremely good cast with appalling continuity and much silent driving, often obviously on a set. Much horse action which was lovely and a galloping yippy dog, but all this did not a good movie make. Pointless drivel. Yeah, I'm harsh but I thought there might be a tiny payoff at the end but no sirree bob.

And oh yeah, our book made the front page of a local newspaper.

Posted by Wisewebwoman at 12:40 AM