A gift of homemade bread from a fellow tenant - I'm on their regular list of donees. I say they, as her husband does the baking and she delivers to a favoured few in the building.

I was wondering whether there is a magic age for us oldies to be described as "sharp as a tack". Turning 80, 90? And to not be described as such would mean dripping some marbles? It's like the expectation is for a shedding of same marbles as we cross the hurdle of another decade? I've yet to hear an oldie described as thick as a plank. And surely those outnumber the rare "sharp as a tack" crowd? I'll keep my ears peeled for further research on this matter.

Did you all know about green onions? You buy a bunch once a year for a $1 or so and they last for the year when you put them in a glass of water and top it up once in a while. Just keep clipping and fresh new spears appear. I use a scissors.

Especially for my Australian readers: herewith a picture of the snow outside all piled away tidily and that crystal blue sky. 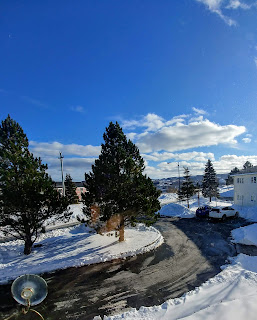 Posted by Wisewebwoman at 11:15 PM