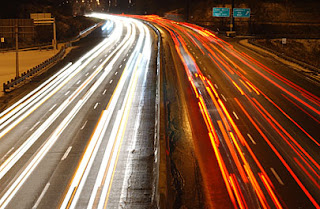 The DVP at night, courtesy of The Toronto Star.

This great swoop of curving roadway was one of my first introductions to Canadian life. In the late sixties it was this sensuous flow of four lanes, divided in the middle by shrubbery and grasses bringing the inhabitants of suburbia to downtown Toronto. I had never seen anything like it in Ireland, it literally bewitched me. It was like every American movie come to life. The huge finned cars apeeding so carelessly along its smooth surface, their (AM)radios blaring The Rolling Stones and The Beatles.

We were in a carpool for work, my husband and I, and we rode this exotic serpentine twice a day for a few years as we lived in Don Mills which was considered the outer limit of suburbia then. In the larger cars of those days, there were six of us. We all took turns with our cars and the week it was your turn you also paid for the parking which could amount to a whole dollar. We were all young and broke and shared our personal stories on the journeys back and forth. Not that there was much of a story to any of us as we were all so young and just starting out in independence of our parents.

Over the years the greenery in the middle was removed to make way for more lanes and an enormous expansion effort extended it to the new outer limits of suburbia.

Needless to mention, it has never kept up with the north-south traffic flow and is known by all as the Don Valley Parking Lot.

Because of where I live temporarily now, I am forced to use it, but thankfully not at rush hour (was there ever a more oxymoronic term than rush hour?)

There is a strong sense of deja-vu as I negotiate its twists and turns. I remember the old days of the car pool and where we picked up the other passengers. And I realize that was forty years ago. And how we've all lost touch. Some of us could be dead even.

The DVP has also got a reputation as being "haunted". Folklore has it that it was built along a native burial ground. This apparently explains why often a solo car will have a fatal accident, all by itself. Or two lone cars will crash into each other late at night when driving conditions are perfect. And far too many have suicided from the bridges that span it.

I get a little fanciful, thinking this could be symbolic of life itself, this DVP. The unreachable bridges overhead, carrying trains and other passengers. The depths of the river by its side, coming back through dedicated volunteers from being a dead river to a thriving and alive one. A trail has been added for joggers and cyclists and walkers by the riverside, hidden from the parkway overhead. A secret world.

I hear the summer heat presses a cloud of pollution down its whole length. Thankfully, I haven't witnessed that and I will be long gone back to Newfoundland by the time each summer rolls around.

But I do get the sense that the DVP and I are somehow intertwined in each other.