John McCain will be the Next U.S. President 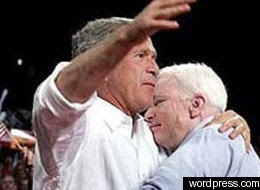 The outcome of this U.S. election affects everyone in the world. If the Project for a New American Century continues its empire building mode there will not be peace in our time or anyone else’s for that matter. Not to mention global warming solutions and other dire, pressing issues.

As a Canadian, I am concerned. Water is evaporating rapidly in the country to the south of us and even though Canada has diverted much of her water to accommodate the crisis, more and more is required. Force may be used to get it. The next wars will be fought for water.

I signed a petition today from the ‘rest’ of the world to the nominees now left in the US election.

Though I’m left feeling cynical. As if these anointed will pay attention to the world outside the bubble of the U.S.

Why do I think John McCain will win the election?

For many, many reasons. But the big one is the cult-like support of Obama. To my eyes and ears this is not a political campaign. A worship of an idol, yes. And, particularly the media adulation of him beggars belief - this very same media who are bought and paid for by Big Corp. Remember? And who went after Bill Clinton’s dalliance with the fervour of a pack of rabid dogs and have blithely ignored the current incumbent’s monumental law-breaking, murdering, torturing policies which would have him impeached a thousand times over if there were such a thing as an impartial press.

I hold nothing against Obama, I believe he is a wonderful human being, given to the type of oratory that Martin Luther King used to captivate an earlier generation. At times, if one closes one’s eyes, he even sounds like MLK. He is a gifted speaker and no doubt a marvellous lawyer. But he has only been in the Senate since 2004 and he admits to some very poor managerial skills and no one, but no one, is asking him the right questions. If one listens carefully to the inspiring rhetoric, one realizes that he keeps pointing the fingers back at the audience, the hope will come from YOU.
Now, what change are YOU prepared to make?

Also, is no one else outraged at the misogynistic statements being made over and over again about Hillary. Are the so-called feminists that I have revered over the years now all retired or brain dead? It is open season on her legs, her voice, her tears, her hair, her pantsuits, her philandering husband and today, again, it was her child, a grown woman of 27. The media blasted Hillary for “pimping out” her daughter. And who can forget that most horrific T-shirt in election history: “If Only Hillary had married O.J. Instead!”
Where was the outcry of feminist voices? Hillary is a woman who has fought pro-bono for years for the betterment of women and children. No one talks about this. She’s got the backs of women of all ages, particularly those of the poor, and women have turned on her in stupefying numbers.

She is even criticized for putting her own money into her own campaign. Everything she does/is/says comes under a negative microscope of such epic proportions that it makes me squirm for her. But in spite of this she continues. She does not wilt, her belief in herself and her country keeps her moving. Backbone? Of steel.

In all the adulation surrounding the multiple-Kennedy endorsement of Obama, no one thought to mention that Robert Kennedy Junior, one of the world’s leading environmentalists and also a River Keeper, supports Hillary. If Ted Kennedy had supported Hillary can you just see the headlines about Chappaquidick all over again? But the media was silent when he threw his shoulder at Obama. This man was complicit in the death of a young girl then and did not notify authorities. She struggled for hours in an underwater car that he managed to escape from and he went to a hotel and slept. I mention this to show how silent the press was and is.

Isn’t anybody suspicious about this media complicity? All aboard the Hillary hate wagon and let’s all worship the untried and inexperienced Obama? Talk of brainwashing! Well, there are a few lone voices of reason out there.

As a senator she has learned compromise and negotiation. She has gotten to know red America as well as blue. If she could win over the rednecks in upstate New York, she can win over any American. She knows this country is full of "security" moms as well as soccer moms. Since she is a woman, she has to show she's ready to be commander in chief. Hence her "triangulation" on Iraq and her signing the absurd Lieberman-Kyl resolution, which calls on our government to use "military instruments" to "combat, contain and [stop]" Iran's meddling in Iraq.
By the time it came up she must have known the Cheney-Bush war profiteers would never embrace even partial peace. She had to win over her America and theirs.
Who ever got elected in the United States without moving to the center? Not Ralph Nader the narcissist, nor Ross Perot the spoiler, nor certainly Adlai Stevenson the "egghead," nor Ronnie Reagan the red-baiter from Hollywoodland. Dubya presented himself as a "compassionate conservative" and our dopey press bought it. They inflicted him on us because they thought Al Gore was a nerd. The right-wing media barons happily smeared the better man for no good reason. Noam Chomsky predicted all this 25 years ago, when he said that the concentration of the media would rob us of real news.
It certainly has. We can read all we want about Britney, Paris, Heath, Tom Cruise, the Spice Girls and all their buds -- dead or alive -- but we can't read about how many children have been maimed in Iraq, or their dead and legless or armless mothers and fathers who were shocked and awed. But we know it's happening. And we feel the great weight of our complicity.

I look into my crystal ball and with dread, predict what’s going to happen to get the Republicans back into the White House and the 100 Year War promised by McCain.

Obama will win the nomination and then he will be torn limb from limb by the ravening hordes of the so-called impartial media. (Just remember what they did to Gore and Kerry!)

The brilliant attack dogs of the Right will begin the prolonged lynching:

· On his colour - why doesn’t he ‘own’ the white side of his family, his mother’s side?
· Why does he have the middle name ‘Hussein’? Isn’t that a Muslim name?
· Isn’t the black side of his family Muslim?
· Did he not attend a Muslim school?
· Isn’t he on the Muslim side of the war on terrorists?
· Isn’t this how the Muslims are coming after us here?
· His father has multiple wives.
· He is for legalizing drugs (marijuana)
· He was a drug user himself
· He has no experience in fixing the economy.
· He’s never been a manager.
· And on and on and much, much worse.

And who’s left standing after all of this: Good ol’ Vietnam Vet, 100-year-war waffling (on just about everything – check him out!) John McCain. Everyone’s grandpa. Bush's very own teddy bear.

And I’m praying I am so wrong on this but my intuition tells me I’m right on. Please let me be wrong.

{Sorry it is such a long post but I feel so strongly that the world is headed for such a monumental collision course!}
Posted by Wisewebwoman at 1:09 PM