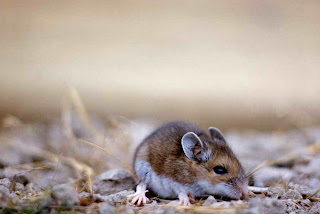 We don’t have a word that describes those moments suspended between the fearful and the brave, the ugly and the beautiful. Moments like this for me have involved animals. Perhaps other languages have that strangeness of feelings covered. Like funerals when you want to laugh, and weddings when you want to cry.

And a cat I saw the other day. It had been hit by a vehicle, no doubt, and dragged to a nearby snowbank. A tabby who looked like he was asleep, but the bright red blood on the snow told his story. The sleek fur of the cat and the invisible wound bleeding his life onto the hurting-white snow, his owners still unaware of his dreadful fate. An awful and indelible portrait. Savage beauty.

And speaking of cats - I was between cats once. Working cats as it turned out because my house became plagued with mice.

Mice have terrified me since I was three years old and one ran across my bed. I had them mixed up with rats in my imagination and thought they would eat my nose right off my face. I could hear them behind the skirting (base) boards of my bedroom in the ancient old house in which we lived. My father, to his credit, honoured my terror and every night would go around the circumference of my bedroom with a hammer and nails, banging fresh pieces of wood on to the existing skirting boards to keep the mice ‘out’. Then he would sing me my song and only then would I fall sleep. When I look back at those moments they are strung between the horror of another mouse on my bed and the love of my father who performed this ridiculous nightly act to keep my terror at bay.

But back to the story. The invasion of mice in my house was finally dealt with by a professional pest control service. But in the meantime, one had managed to infiltrate the piano and in the middle of the night would scamper up and down the keys playing these light tinkling glissandos. I called him Beethoven. My dog of the time, a very intelligent Lhasa Apso, had a ‘family’ of small stuffed animals that she liked to groom and carry in her mouth around the house only to regroup them in different areas. She would line them up in various locations in the house as if for a photograph. There were ten of them and they all had names. If you asked her for ‘Pooky” she would select the right miniature and bring it to you. Ditto for “Dusty” and on down the line. A dog enchanted with her own cleverness. Over breakfast one morning, I was looking at the latest arrangement of her family, poised between the living and dining rooms and realized there was an unnamed extra. Yep. It was a freshly groomed dead mouse, all his fur slicked beautifully into place by the maternal dog. Suspended between throwing up and screaming and laughing. That was me.

A condition for which there is no name.
Posted by Wisewebwoman at 1:00 PM