The Use and Abuse of the English Language 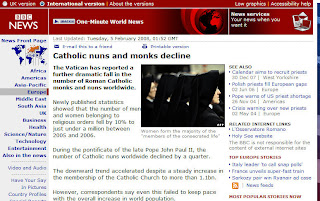 Here's the rest of the story.

Now it could be me and the aging process but when I first saw this headline on BBC news today, no less, I immediately thought - is this some dreadful disease that has befallen the clergy of the Catholic Church? Or maybe they're just all aging into their declining years?

Wrong on both counts as it turns out. It seems that the numbers of clergy are on the decline.

Now what would you have assumed from the headline?
Posted by Wisewebwoman at 6:49 PM