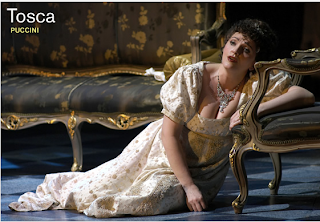 I was at The Canadian Opera Company's production of Tosca last night in our glorious opera house.

This is my third attendance of this opera over the years and it was the best production so far. It is a particularly poignant opera for me as it was banned in Ireland for a long time due to its negative representation of the Catholic church.

My father had a love of opera and a fine singing voice and to overcome such censorship of this glorious music, the amateur musical groups to which he belonged would adapt the arias into suitable English and sing these excerpts in local concerts in local town halls. To give everyone a bit of a taste as to what they were missing. I'm talking the twenties and thirties here. In small town Ireland. He never did see Tosca in his lifetime.

I think of him as I let the music swirl around me and allow my senses to be wrapped completely in the power of this particular production. I have the fancy that I go for him as well as for me as he took me to my very first opera when I was fifteen, in Cork's Opera House. A spell binding production of Madama Butterfly. Thank you, Daddy.

And if there are angels, one of them is Mikhail Agafonov, an incredible tenor, an astonishing voice, who played Cavaradossi to a rapturous sold out audience. Bravo!

I cried.
Posted by Wisewebwoman at 2:28 PM