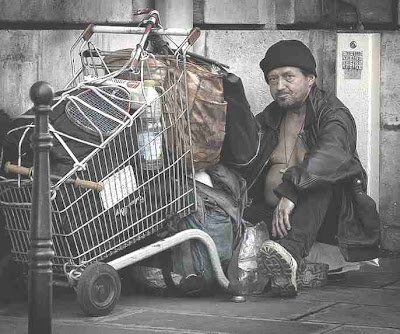 Poverty is a desperate thing. I caught a documentary there last week on the massive Famine emigration out of Ireland in the 1840's where most ports in North America were closed to the sick and desperate Irish who sailed off on the coffin ships - so called because of the deaths on board - and arrived at the mouth of the St. Lawrence here in Canada where the healthiest were then sent on to Toronto only to be met with hostility and fear in the face of their sickness and poverty.

I next read Jenny's post over at South Belfast Diary where she wrote about community services and how to expand them to encompass all strata of need.

And I got tweaked in the head, you know how that is, by a conversation my daughter and I had last summer.

"You know, Mum," she'd said, "The Irish government has like totally redefined poverty in very different terms and it's got nothing to do with money. It's things like the availability of the stuff you and I'd take for granted and not even think about."

So I got to digging around and found:

What is Consistent Poverty?
The official Government approved poverty measure used in Ireland is consistent poverty, developed independently by the Economic and Social Research Institute (ESRI). This measure identifies the proportion of people, from those with an income below a certain threshold (less than 60% of median income), who are deprived of two or more goods or services considered essential for a basic standard of living.
The consistent poverty measure was devised in 1987 using indicators of deprivation based on standards of living at that time. The Government in 2007 accepted the advice of the ESRI to revise the deprivation indicators to better reflect current living standards and, in particular, to focus to a greater degree on items reflecting social inclusion and participation in society. This resulted in the measure, originally based on lacking one or more items from an 8-item index, changing to one based on lacking two or more items from the following 11-item index:

1. Two pairs of strong shoes
2. A warm waterproof overcoat
3. Buy new not second-hand clothes
4. Eat meals with meat, chicken, fish (or vegetarian equivalent) every second day
5. Have a roast joint or its equivalent once a week
6. Had to go without heating during the last year through lack of money
7. Keep the home adequately warm
8. Buy presents for family or friends at least once a year
9. Replace any worn out furniture
10. Have family or friends for a drink or meal once a month
11. Have a morning, afternoon or evening out in the last fortnight, for entertainment

So simple and yet so unattainable for many, many citizens right now. The ever expanding homeless crisis in the U.S.A. particularly is truly alarming. I'd say that many are lacking most of what's on this list. And I'm aware also that you don't have to be homeless to be poor. And that loneliness and isolation are an intrinsic part of the problem.

And, H/T Ronni at Time Goes By, I quote from a fine article written by James K. Galbraith, son of Kenneth, writing last week in Washington Monthly which brings ubiqitous poverty even closer:

“For the first time since the 1930s, millions of American households are financially ruined. Families that two years ago enjoyed wealth in stocks and in their homes now have neither. Their 401(k)s have fallen by half, their mortgages are a burden, and their homes are an albatross. For many, the best strategy is to mail the keys to the bank...

“...the American middle class find today that its major source of wealth is the implicit value of Social Security and Medicare – illiquid and intangible but real and inalienable in a way that home and equity values are not. And so it will remain, as long as benefits are not cut.”

Note to self: make a food bank drop-off. ASAP.
Posted by Wisewebwoman at 1:58 AM