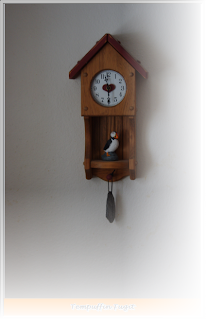 (Picture of the clock in my office – a touch of cabin fever, yeah?)

And fugit, it certainly does.

Today is a better day. Not great but better than yesterday. These forced stalls in life give one time to reflect.

For oh how time flies particularly as we get older. My father had warned me. The Da had cautioned us all of this speeding up thing. And accelerate it does. I can't even imagine what it must be like if one hits 80 when a year must seem like a day. Right now in this AD year of 2011, I misplaced February along the way and January seems like it never happened.

I recall with clarity the summer days of childhood, mostly on a strand in West Cork when it seems like our time there went by in slow motion. I can still smell the salt in the air and hear the slap of the make-do cricket bats (we used hurleys and sliotars) as we played endless games of rounders – a form of cricket. I could never get enough of it. In between we would practise the crawl in the ocean which was freezing cold, always, but we never complained. The one big expense my mother had in summer was making (she was a great hand at sewing) multiple togs (swimsuits) for each of her children as we lived on the strand and in the water for the summer.

Rainy days would last forever. The Da had to invent a game to keep us from going off our rockers. There was an oilcloth with a checkered pattern on the table in the kitchen and we would play push-the-penny as avidly as we played rounders. If you pushed the penny from the edge (using only one finger) into the centre of a square you kept it. These were the big old pennies and it had to land right in the centre of a square - which wasn't much bigger than the penny itself – for you to keep it.

In those dear dead days a penny was a fortune. It would buy 5 conversation pieces or a gob-stopper which lasted all day and we were forbidden to buy them as they could choke you. So we snuck them. All the time. 3 pennies would be a roll of gum drops or pastilles or a liquorice pipe.

Now ask me what I did yesterday.
Posted by Wisewebwoman at 3:41 PM