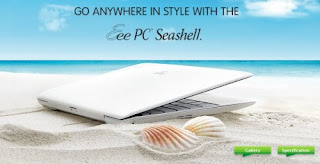 I was encouraged by my blog friend Viewpoint 2010 to investigate (once again)netbooks. When I had last done so, they underwhelmed me. Now I am completely impressed. I am actually test-driving it now, updating my blog.

I went a little higher in price than I intended mainly because my genius tech guy swears by Asus and the grandgirl had a major problem with Acer, which is $100 cheaper. The graphics quality on this is truly awesome for such a tiny unit. I also liked its keyboard, the keys are larger and sturdier than the Acer and the sound and video far superior. I was able to download Open Office no problem (thanks again, Veep!) and install a free 25MG Skydrive storage supplied by Microsoft. I am always amazed that not more users are aware of the best free cloud storage on the web. And Microsoft isn't going anywhere in the foreseeable future so the data is safe. See? Microsoft isn't totally awful. And this saves me a lot of flashdriving when I can access my files from anywhere, seamlessly. And for free.

This wee thing is light as a feather and I fought for and received quite a shocking discount on her and they also threw in a hot pink skin, a camera chip, a flash drive and set her up for free. It's only lately I've developed the skill of haggling. It would embarrass me even to start before. Now I'm older and tougher and shamefree. And also ready to walk away if the deal is not to my suiting. So hello little bargain Asus. We are going to be very good for each other.

Elsewhere, I had the shock of my life when I had an email from a very dear 82 year old friend today. Now, that was worth a phonecall to her. She has had a fairly tough past 15 years taking care of her husband who had Alzheimers and only began reading again this past winter after he died and proudly told me she had read 7 books so far. She also has embraced technology and is now on line. I am so inspired by elders like her who rise up again and learn and relearn new and old skills and live to tell the tale. They never shut the door on possibility as I have seen so many do.

And yes I'm packing, easy when one has empty bedrooms to lay out the potentials and evaluate carefully. I'm a good packer, rarely take more than I actually plan to wear and believe co-ordinates are the key along with lovely scarves. I am trying to decide on 'dress shoes' at the moment. I always wear the trainers and usually take sandals (Birkenstocks)for alternative footwear. I don't know why my only pair of high heels is calling me. Silence! you twisty, silly things, I say, but they don't listen.

And awful, awful, Ansa sees the suitcases and my clothes scattered about and is throwing up. It breaks my heart. How on earth does one explain one's short absence to a dog?
Posted by Wisewebwoman at 5:26 PM