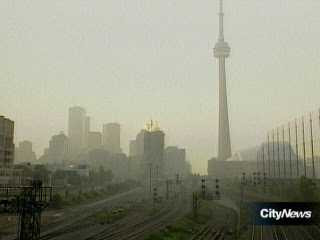 Did you ever feel like you are standing some distance from yourself, wondering why you don't feel like yourself? No? Well, that's me at the moment.

I don't feel well, I don't feel deathly ill, but somewhere in between. Coughing, difficulty breathing, leg pains, thigh pains. "Off": that's me. The older I get the more the city air (a loose term for oxygen, I know)affects me. I tend to shallow breathe. It might only be me but I feel it is toxic. It reminds me when I was down in Mexico City and my brother told me an environmental engineer with a fresh contract in his hand for a project, had moved his wife and family down there and three days later they all took the first plane out. He'd done some testing. And fled.

Does anyone test the air in Toronto? I know anyone who lands in St. John's to visit me remark about the air immediately they arrive as they suck in huge lungfuls of it.

I was feeling really sick last night and trying to sleep and a party next door breached many decibel levels. I'd forgotten that. Even over and above the traffic and sirens and airplanes overhead, how very noisy next door parties can be. Could be I'm a fully fledged geezer now.

I was going to stay on for another week or so, there were some events I wanted to attend but my mind is made up today. I am heading back out to Newfoundland at the beginning of this week.

I just can't take it anymore.
Posted by Wisewebwoman at 11:40 AM