The Story of Burt, Part 1 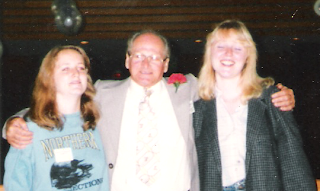 Burt with my daughters

I must get his story down before I toss off my mortal coil. I started and finished it on the ferry, that blighted ferry, so out of lemons comes lemonade, yeah? I mentioned Burt before, here. He was truly one of a kind.

Burt's father died in a mill accident in the town of Dalhousie, New Brunswick, when he was 8. He and his two brothers and sister who were younger, along with their mother, were left penniless. He still remembered the raw hunger in his stomach when he went to bed at night. His mother was a proud woman who kept their worn old clothes in immaculate condition. He would see her sitting by the stub of a candle, late at night, mending and darning and knitting if someone had been kind enough to give her some wool.

When Mr. Benoit, the owner of the local hotel, started to come around a few nights of the week the children wondered about it. Mr. Benoit had lost his wife in childbirth a few years before and the baby had only lived a week before it followed its mother to the grave. He was a tall man who never smiled and who was given to glaring at the children in such a frightening manner that they would scamper up to their attic room and stay there until dawn by which time Mr. Benoit would have left.

Burt was old enough to speculate on what went on between his mother and Mr. Benoit. Except she didn't call him Mr. Benoit anymore but Edgar.

A month later a whole series of events took place. Mr. Benoit married their mother in the side chapel of Notre Dame and they all moved into the private residence end of the Benoit Hotel. The boys shared a large bedroom with 3 single beds and their sister got her own small room. It all seemed like something out of a fairy tale.

One afternoon, their mother sat them down in her bedroom which had two windows overlooking the falls. A spectacular room, with real lace curtains in the windows and an armchair in which she sat while they lined themselves up along the edge of the bed.

“It’s a miracle,” she told them, “My prayers have been answered!” And here she bowed her head. Burt's mother was devout, saying the rosary, offering up intentions, pleading with the almighty for relief and never blaming him when things went spectacularly wrong.

“Now, Mr. Benoit is still to be called Mr. Benoit by all of you. He would prefer it that way. You are all to behave yourselves around him, he does not like noise or questions or out of control or disobedient children. We are all truly blessed that he has opened up his heart and home and taken us in. He is a good man.

“And now also, Burton, you are to quit school immediately and help him around the place, repairing and fixing and cleaning.”

This was a blow to Burt as he loved his books and had hoped to get enough education to enlist in the army. But he had no choice.

The work was back breaking and seemed never to stop from dawn to dusk with short breaks. He learned how to replace roof tiles and broken pipes, paint and repair windows, fix squeaky doors and leaky toilets and threaten unruly drunks and sweep everything that needed sweeping all day long.

to be continued
Posted by Wisewebwoman at 2:36 PM