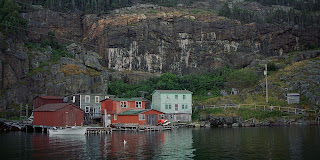 He thinks: A hundred years. One. Hundred. Years.

That's how long the old store has been smack dab in the middle of the village. Selling everything way back in the day from anchors to sausages and still doing so. Used to be they'd take lumber and fish in trade. He'd heard rumblings of long ago - grudges passed down through the generations. Of unfair pricing. Of rejecting the wood if it wasn't up to par. And then going back in the middle of the night and taking it anyway, free. Of one of the store's boats being sunk in revenge for this.

But he'd tried. To be fair and honest that is. Well almost honest. If he added up the bills for some of his more trusted customers to settle at the end of the month, he'd always round the pennies up. He'd make a few dollars that way and call it interest. Sure wasn't he entitled?

First it was the gas. Over ninety years they'd run a single pump of it outside the front door. And now that was gone. A flimsy excuse from the oil company, they couldn't come down around the corner in their new big rig. He pretended that was true. He knew it was a losing financial proposition to send out a truck from town to fill up his little one pump underground tank.

Then it was the tickets. He wasn't selling enough to justify stocking him up every week. Plus he'd never had a winner even though there were some that bought fifty dollars worth a day. All hoping for the big win. A tax on the poor, he thought privately. All giving up their welfare checks in the hope of winning a few million dollars while their children scraped by on bread and cereal.

Ten years ago he buried the wife. She suffered a lot. And then his lady friend followed the wife, exact same type of cancer and suffering, four years after that. So he decided to fly solo. Spent all his days and most of the evening in the shop.

And now, well now, he was going to cut back on all those lonesome hours at the shop. Walk around a bit, look at the sea. Hustle up his memories of when the kids were small and Patsy was alive and think about the time they took an extra one in because he wasn't being treated right by his mother. There were a lot of mouths to feed then but a lot of laughter coming out of those very same mouths too. Yes, surround himself with those kind of thoughts and not think about how sick he was feeling lately. As if his own cancer had come back and was now stretching its muscles and playing the waiting game. A shame that their eldest, Marcie, was never right in the head. Stayed stuck at nine years old. And now she was nearly fifty. A right care she'd been, Patsy was good with her but he had had to keep her sedated so she was more docile. Otherwise her rage would eat her up from the inside. He couldn't bear to think of who would soon care for her. His guess was no family member would step up to the plate and he couldn't ask any of them now could he, so it would be a facility for sure, but he shoved that thought quickly out of his head. All the rest of his children were in Alberta making staggering amounts of money off the oil sands. Along with a hundred thousand other Newfoundlanders.

The shop would close soon. Of that there was no doubt. Inside his head, he apologizes to his father, to his grandfather and his great-grandfather. Soon it was going to be time to see them and explain himself.

He was ready.
Posted by Wisewebwoman at 10:27 PM