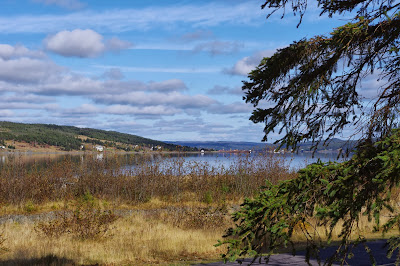 I was sharing the following with Grandgirl today. She's here for far too short a spell, she arrived late yesterday and leaves on Tuesday. We did some serious hiking today, capitalizing on the glorious weather. As we were climbing the woodland trail at the back of the property, we both turned to look at the panorama of ocean and forest and distant headlands. I was reminded of a visit from a technician the day before.

We greeted each other like old friends. Us CFAs tend to do that. He nailed my accent as very southern Irish. I nailed his, first time, as Liverpool. I was a friend of a friend of the Beatles. Yes, those ones. Another story for another time. So we shared some backchat. As one does. He was ex-airforce and on the side had his own diving company. He asked me could he walk about outside, it being another Denim Day on the Bay and I agreed. This fine weather has been trailing me since I left here for my trip to Ireland in mid-August and got back here early September. Maybe talking about it now is going to jinx it.

Anyway, as I was saying. Yer man walks about the meadow, then out front to the water then back again up to the barn and then to the Tigeen, shaking his head.

He finally came back in again and said:

"You know you live in Paradise, don't you?"

Well, I do know that. Of course. But lately, that paradise feeling had been overlaid a bit with my stay in West Cork and then the excitement of Grandgirl being here for some days taking precious time away from her second year university courses.

So I told her what the tech had said. And we both stopped to drink in the grandeur and majesty of the my forest trail and the sea off in the distance.

"Sometimes," she said, "We need to revisit our world through a stranger's eyes."

Posted by Wisewebwoman at 9:48 PM