The Blues for the Greens - Part 3 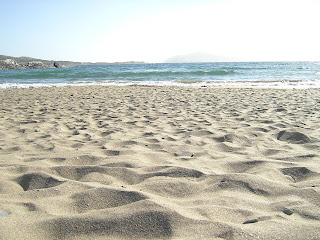 An unusual shot of Silver Strand

So there we were on Sherkin Island on Friday night. We were staying at the hotel for the weekend. The pile of us. The whole big gang of us. It was like summer camp without counsellors. Breakfast had that air of an unceasing cast of characters brought forward for entertainment and stimulation. I was up early so as not to miss any of it.

Every day was cloudless. Every day we hit Silver Strand and banjed off. As only the Irish can when we get a spot of rain-free, cloudless days. There is a frantic air to the sandcastling, the swim-togging, the picnicking. We grab it while we can as we shrug off the mould and rust.

So there we were at dinner on the Friday night. And an old friend who lives on the island and his wife were invited to join us. To catch up. This old friend I've known since I was a single-digit-aged child. We go back a long way. I got to know and like his wife in later years when I rented a house on the island in the summer with Daughter and Grandgirl.

So the moment of comeuppance: they arrive and get settled. There's a big crowd of us around the table and Sinead (pseudonym), the wife looks across the table and greets me in delight and then says, looking at my sister (who is fourteen years younger than me):

"Oh, WWW, I'm so happy you brought your daughter with you!".

Karma, she be savage.

You can imagine how this took off for the rest of the weekend. Sinead was mortified in spite of my reassurance of absolutely no offence.

We couldn't stop laughing as I explained to the family I had a big, long-held secret to tell them. My sister called me "mammy" for the rest of the stay, requesting permission for various activities like swimming and eating and referred to her brothers as her new uncles, including my "twin."

I think it's the most powerful healer of all.
Posted by Wisewebwoman at 11:22 AM