The Blues for the Greens - Part 2 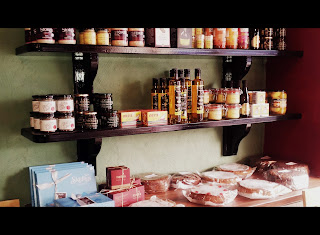 Behind the counter at Stuffed Live.

We were sitting at a table outside a restaurant in Bantry, my youngest brother and I. What an extraordinary name for a cafe, we had mused earlier: “Stuffed Live.'

Well, our family tend to do this, both at home and abroad. Stuff ourselves live, that is. So we had promptly headed in the direction of this sublime promise. It was only when we checked the header on the blackboard that we saw that the name was actually 'The Stuffed Olive'. Harumph. Who needs further correction of the lenses on the spectacles? Ah, but look, the “O” on the sign overhead was in palest green, who could see that? we commiserated with each other.

As I was saying. We sat there enjoying these fabulous sandwiches and cappucinos. Our family could hook up twelve IV lines to an espresso machine and just lie down in bliss all day. Seriously. The place was packed, so it was no surprise when we were asked by two women if they could join us. We are an insatiably curious bunch, us lads, so we greeted them like old friends and before plates were set down, we began the interrogation. Daughter and Grandgirl maintain our family should prepare a standard questionnaire listing all the questions to ask strangers to save time, both theirs and ours. I am mulling that one over.

Now this was a most fortuitous meeting as both women were CFAs* of many years, their individual instant loves of West Cork many years ago swept them up from London, England, and New York respectively without a backward glance. They were both involved in local theatre and one had opened a bookshop. (Strong connections when I take my next play to Ireland, and maybe a West Cork book launch, who knows?)

In the hind of the conversation they asked what the pair of us were doing. “Brother and sister,”we replied, “strengthening up for The Beara Way hike today,” We ordered another round of cappucinos. “We are celebrating our birthdays this coming Saturday!”

Well, all fine and dandy that. Except my brother is exactly 10 years younger than me.

I wondered why he wasn't as pleased as I was.

Ah, but revenge is sweet.

My comeuppance was coming.

Posted by Wisewebwoman at 11:02 AM