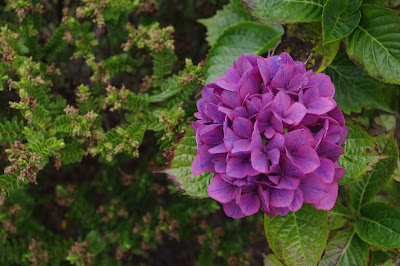 Yes, I know the word is hydrangea. But my mother bestowed her favourite flower with its own pet-name. In my recent sojourn in West Cork - referred to as the 33rd county of Ireland by those that know it best - the byways were a feast of hydrangeas. West Cork is unique, still embracing its marvellous quaint old towns, hidden vanished fishing villages with the remains of stalwart stone walls submerged in the briars and brambles, its chimneys ceaselessly poking the sky, long abandoned, perhaps in the Irish Holocaust - quaintly and falsely termed "The Famine."

It was here, in West Cork, I found the twin of a site I had seen in Toronto. A memorial to a horrific Air India terrorist bombing off this Irish coast in 1985, in which all aboard were massacred, bodies vapourised, gaping black holes wrenched in families, never to be filled again. Both memorials are a testament to the creative and poignant spirits of the survivors where all the dead are listed, many of whom were entire families on a visit home to loved ones in India.

I didn't photograph the site, just as I didn't when I saw its counterpart in Toronto. I found them extraordinarily moving. In ireland there is a beautiful natural garden on a small headland overlooking the sea with steps down to the shore.

And here again were a riot of hydrangeas. The colours are astounding, varying from white to the deepest purple with pinks and blues and even touches of orange flaming the petals.

And the words on the sundial brings comfort and hope:

"TIME FLIES / SUNS RISE AND SHADOWS FALL /
LET IT PASS BY / LOVE REIGNS FOREVER OVER ALL".

Posted by Wisewebwoman at 2:57 PM