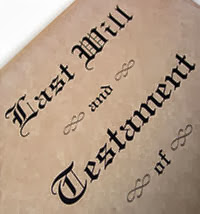 But, big but, this is exactly what happens in families after the death of the last parent.

Two friends, within a very short space of time, have lost their surviving parent. Both parents had lived full and interesting and long (90+) lives.

So fine and dandy, lovely services, eulogies, songs from the grandkids, flowers, both were smiley kinds of funerals and even involved simultaneous broadcasting to the far-flungs in America and Australia. Oh, the wonders of the e-world. Long may it continue.

So there you go and the dust settles and the earthly bits and pieces and bank accounts and all things: built, gilded, diamonded and chinaed of the dearly beloveds are divided up and tied with a ribbon and dispensed.

Oh, not so fast there.

In the first case, the sole heirs, a brother and sister, are joint executors. But it turns out Bro had had his father sign a power-of-attorney and had been pillaging the estate for years prior to the death. So there wasn't much left. Sis had suspected some financial shenanigans but when the spoils were finally divided she (an accountant by trade)finally confirmed the mountainous level of the embezzlement. So what does one do? Sue your only sibling through a welter of legal costs she couldn't afford? Call the police? No, she took her measly cheque, pondered the options, and let it go along with the resolution to never, ever speak to her brother again.

In the second case, the mother had willed that her estate be divided evenly between her six children. But a sibling had been living in the family home and now refuses to leave. My friend, single, getting on in years herself and with very little in the way of financial reserves, needs her share of the money that the sale of the family home will give her. Sibling has emptied the bank accounts as co-signer of the deceased mother's bank accounts ("for ongoing household expenses"). One of the other siblings, a solicitor and the executor (conflict much?), sides with the squatter. The other three don't want to "get involved" and as privileged males "don't need the money."

My friend is reasonable, has told squatter-sibling that they can remain in the house for a reasonable length of time (a year or two) or buy her, my friend's, share out either solo or along with the other siblings. Squatter has managed to save a substantial sum by living rent-free with mum for the past 10 years - claiming government subsidies for mother care along with a monthly cheque out of mum's account and working part time for another sibling.

Squatter-sibling has now severed all contact with my friend and has threatened suicide if "tortured" by these demands any further.

Neither of my two friends have the financial resources for lawsuits.

All this is par for the course. My own family of origin had its own Hiroshima after the death of my father. And there are still occasional reverberations all these years later.

Much as we try, nothing is ever clear cut and amiable in the brutal finalization of death.

Posted by Wisewebwoman at 10:17 PM