The Blues for the Greens - Part 4 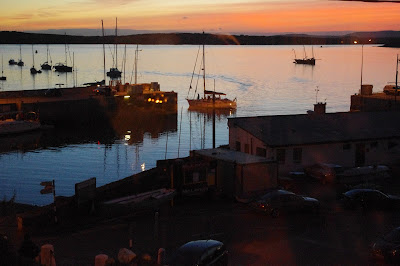 Taken from the window of our birthday restaurant in Baltimore overlooking the harbour and our waiting ferry.

The other segments would take a wee book unto themselves. But the précis (does anyone still use that word) is as follows:

Sister and I went to the Cork Museum (twice, but that's another story) and caught a remarkable archival documentary recommended by my brother-in-law.

We also set to singing some old duets of ours in the pub on Sherkin Island which was mein-hosted by the most unpleasant publican we have ever chanced to meet. He was so appallingly rude and ungracious that we were all helpless with laughter several times, quite disbelieving that anyone so incensed by his job would continue in it. We kept looking around for a candid camera or a Monty Python crew to jump out and say "gotcha!". But alas, no such luck.

Our dinner in Baltimore at Jacobs was wonderful and we had arranged for a special ferry to take us back to Sherkin later on.

So you can guess what we did on this ferry. Yeah, we sang some more of our trusty old songs from our childhood days on the island. We didn't want this magical boat ride in the starlight to be over. And we all were a little teary-eyed as we pulled into the pier on Sherkin.

But Sister-Daughter had a surprise for The Twins. Overlooking the harbour, she handed Brother and me some lanterns and asked us to write our wishes on them.

Then we lit the candles inside them and sent them aloft. As we watched in awe, it seemed like they floated forever up to the stars. 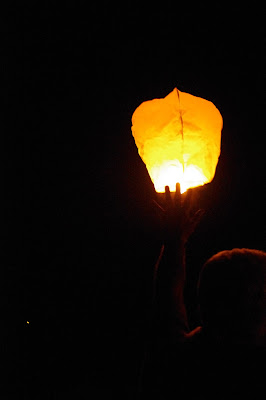 Posted by Wisewebwoman at 10:26 PM