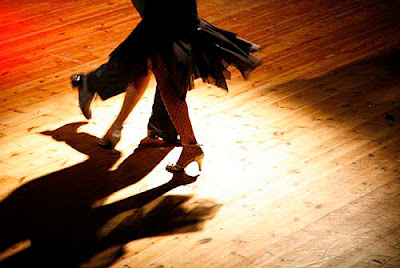 This weird thing has happened more than enough times for me to feel a chill when it does happen.

Yesterday, Grandgirl and I were discussing being in love when she asked me about my great loves and we started chatting about it. You know, why was I attracted, what happened, where are they now kind of thing.

I mentioned there was another fiancé, back in the day, before I got engaged to her grandfather.

And we talked about him for a while. He was an extraordinarily good-looking young man and one of my stellar memories is of him dancing me to the middle of the London Rivoli Ballroom and going down on one knee and proposing to me. He had his dark side too, though. I've often said in hindsight if I had married him it would have lasted a year, maybe two. There was a wild unsettled streak in him. He had sailed around the world a few times with the merchant navy and knew of things he wouldn't share with me. A wild unsettled streak in me too, I hasten to add, which was not completely visible then and he had unfortunately pedestalized me as a madonna. Not a healthy thing.

Grandgirl and I moved on to other matters and then today, I get my daily email from my long time friend in Dublin in which she tells me that JG had died and was buried, well, yesterday. He'd spent the last six months in a hospice in Cork.

Goosebumps? Yeah, for each of us.

And a yearning nostalgia in me tonight. For what, I couldn't tell you.