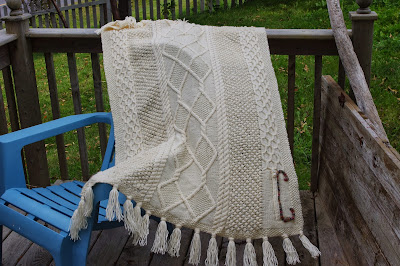 I sometimes wonder why others don't take up pursuits that would bring them relief from anxiety or sorrow and gift them with diligence, curiosity, utilization of imaginative powers, relaxation, focus, and best of all something tangible to show for it at the end of it all.

The above afghan took me a while. One of those projects I started and shelved and moved on from and moved back to. I'm one who can't sit down and do nothing while gawping vacantly at a screen. I enjoy DVD sets of various top-notch shows, admittedly much later than everyone else who have cable service and derive a "buzz" that is engendered around a successful series during its original broadcast. But I also don't suffer the barrages of advertisements they endure either.

I finished this afghan, pictured above, while watching the second series of "Homeland" one of those truly great shows.

Whenever I see one of my creations in someone's home, I often reflect on what I was doing when making it, what TV series or movies I watched with it, what marathon phone calls attended its making, what gorgeous sunny strand was I banjed off on or what beloved family members' conversations took place around it or what trips and visits it made with me.

This one will be gifted tomorrow, appropriately enough on Canadian Thanksgiving. I have I-corded (a form of 3-dimensional embroidery I kind of invented) the initials of the couple on each end. They've been married 45 years (from their teen years) and are one of those couples that engender warmth, respect and love around each other and those who are lucky enough to be in their circle.