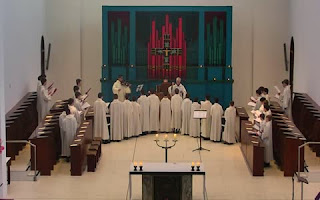 She was comparatively young when diagnosed with the cancer that would eventually take her. Her smoking had always lent her voice a Nina Simone type flavour. Her vibratos alone were felt in one's very marrow. But of course the smoking got her and she was only sixty.

She lingered, as only Poppy could, for about six months from diagnosis to expiration and entertained from the temporary death bed she had set up in the conservatory overlooking the water. It was a fairly nerve wracking visit for her guests, as she continued to smoke with her oxygen tank and its paraphernalia surrounding her. One wondered, at such times, if she intended taking a goodly percentage of her friends with her in her final exit, similar to her first husband Seamus, dead from his massive cardiac infarction, crashing his car into a brand new Ford, killing the elderly couple out on their Sunday drive.

There had been other rumours of course. The resident nine monks in the little Franciscan Abbey up the Lisheen Road from her house had always been frequent visitors to Downalong. Never to the parties or barbecues or soirees, understandably. But always to private sessions, sometimes late at night. She would always joke when asked about this, assuring all in her smoky sinful voice that her brothers in Christ knew all about her misdeeds. She confessed long and frequently to them, she said, for they were sedated with good food and wine into forgiving all her transgressions. She would throw her head back and toss her black hair and laugh and laugh, winding it all up with one of those coughing fits that were just, well, exotic on Poppy but would appear consumptive on anyone else.

So when the death notice appeared in the Irish Examiner all of Cork was agog to see that Mrs. George Wentworth, Poppy Dowling, was to be requiemed, eulogized and buried at the Lisheen Franciscan Abbey. Neither saint nor sinner outside of the monks themselves had ever had a funeral inside the abbey before. The little church could only hold a hundred of her friends but the crowds numbered four times that along with the media. The Lisheen Road, thankfully not a thoroughfare, was crammed with cars and the church doors were left open for those who couldn't get into the church. The monks didn't speak at all, except as celebrants of the mass itself. She was eulogized by Liam O'Dowda, her erstwhile lover, another surprise, and by her eldest child Lorca O'Dowda, now a striking actress of forty, who both wept as they spoke of her.

The service was brief, the internment even briefer. It was noted that she was buried beside Brother Marcus who had died the previous year and was rumoured to be her primary confessor.

Posted by Wisewebwoman at 4:00 PM

Labels: a short story based on fact, Downalong, writing