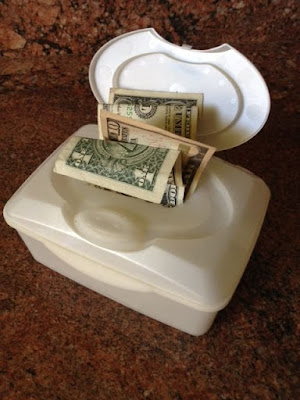 Remember those stories you heard about old women stashing money in odd places?

But view this as a tale from the trenches of old age.

I received cash for multiple reasons in the last few months and I don't know what to do with it so I hide it. There's quite a bit there (I think - I don't stroke and count it). It just lies there quietly. Waiting for death or dismemberment or fire and flood.

There's an odd comfort to it. I remember Granny digging deep in her underwear drawer and handing me a few notes back in the day with strict instructions to "spend it on myself mind you, not on the childer and not on the husband." I know, she fed me a lot of crazy notions about independence and not having too many children to tie me down. At 32 she faked breast cancer (it was a large painful cyst) to stop the nonsense of adding another twenty babies to her existing six children as her doctor said it would kill her to have more. She lied. But I digress.

Here she is with me on her lap as a baby ( I was her first grandchild and her favourite), my mother on the left of her and my darling Granda at the back. A proud O'Sullivan, his clan originally was from The Beara. 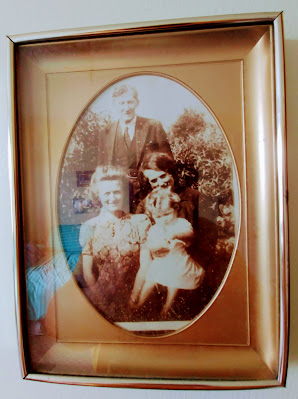 She was originally a Sliney, but word had it very much later on that her mother was the kept woman of the local lord of the manor and her children (or some of them) were in actual fact Abernethys. This bomb was dropped by an aunt at one of the family gatherings.

I need to get my DNA done.
Posted by Wisewebwoman at 11:56 AM