A darling neighbour from my old life, 92, is currently in hospice. She became world renowned when she disclosed her love of receiving Christmas cards several years ago and was featured in some newspapers and local television shows as a meme surged its way around the world as such things do. Thousands of cards would pour in to her from every corner of the world. To our tiny village in Newfoundland.

She lived in her own home until she was moved into hospice having stayed with her son for a week.

Her son put out word last week she was in hospice so the cards started pouring in to her, including mine. I always sent her one. Today, the load was over 500 and in a message from her son to me, he told me he had read them all to her including mine. And her smile was big and wide.

She was a life long smoker. Seriously. The big joke at hospice was that she finally quit at the age of 92 and was on the patch which made her laugh until she cried. That was the kind of woman she was.

I had her cut the ribbon when we had the grand opening of our community library a few years back. And she was my partner at cards in the community hall many, many times. She was extraordinarily sprightly and if I ever drove her anywhere she would leap out of my car and wait for me, laughing as I unfolded myself.

She lost a daughter to cancer about 3 years ago and it was the only time I saw her cry and cry. And I cried too as I held her.

She told me Ansa was the happiest dog she had ever seen in her life as she always had a smile on her face when she was with me. As if she knew I'd saved her. I told her it was a two way street as Ansa had saved me too. And she nodded. She knew.

She'd look for my light at night and I would look for hers and send a kiss across the meadows to her as she did to me even though we couldn't see each other due to the distance. A nightly ritual for years. Makes me teary now thinking of it.

Here is a picture of her collecting donations on the day we opened the community library. She always had a big smile and a great heart that included everyone. And who could resist donating to her? Look at that face! 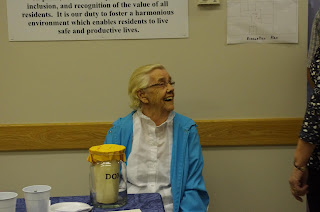 Go to the stars, dear Theresa, you were adored by all who knew you.