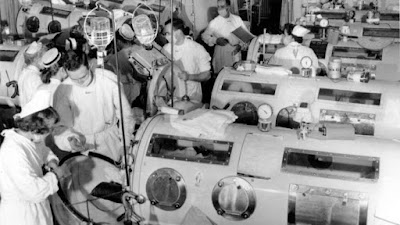 Way back in the summer of 1956 my parents took the remarkable step of isolating all 5 (we were eventually 6) of their children on an island off the coast of West Cork.

For the entire summer.

There was an epidemic of polio in 1956 and they took the preventive strategy of isolating their children from it. Self isolating in other words before it was too late.

This island was primitive, no running water, no toilets, no electricity. And we had to share a very small cabin with another family with 5 children who had taken the same precautions.

But we managed. We roamed the island, played cricket (a lot) and obscure ball games that still come back to me, read every book and piece of paper we found and wondered why our parents were reacting so strongly to something quite vague and invisible. We were 4 to a bed - tops and tails, youngest sleeping with the parents.and meals were in shifts for 14 people, young kids first then the older children and adults. Simple food from local farmers, milk picked up at milking time along with the eggs. We played indoor games when it rained and were marched off to the cliffs to cool off if we got petulant and truculent.

"You're not the only one feeling like this, we all have to get along or none of us do."

And only in hindsight do I thank my parents, for when we finally got back to the city we saw how other children had been affected with this disease. We saw leg braces while many were in iron lungs in the hospitals, permanently crippled.

Mum and dad struck a brave, preemptive strike for the safety of their children, at who knows what cost - 4 parents, 10 children in a tiny, isolated cottage, dear gawd - but we were so very, very fortunate in their concern and love.

And a part of my heart has always remained there. We were right on this beach, the scene of daily cricket (called rounders) and all the swimming we could handle. You can actually see the rusty red roof of the cabin (long in disuse now) just up from the strand.


Posted by Wisewebwoman at 1:23 PM