Thanks for the Enlightenment, Joey! 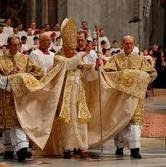 With the appalling upsurge in the suicides of TGBLT youth in the states, it is comforting to know that the Catholic Church is opening the arms of understanding, compassion and sympathy as per the doctrine of its Invisible Cosmic Housekeeper channeled through Joey's writing on the topic long before he was a made man.

"To choose someone of the same sex for one's sexual activity is to annul the rich symbolism and meaning, not to mention the goals, of the Creator's sexual design. Homosexual activity is not a complementary union, able to transmit life; and so it thwarts the call to a life of that form of self-giving which the Gospel says is the essence of Christian living. This does not mean that homosexual persons are not often generous and giving of themselves; but when they engage in homosexual activity they confirm within themselves a disordered sexual inclination which is essentially self-indulgent".

"As in every moral disorder, homosexual activity prevents one's own fulfillment and happiness by acting contrary to the creative wisdom of God. The Church, in rejecting erroneous opinions regarding homosexuality, does not limit but rather defends personal freedom and dignity realistically and authentically understood."

To be totally simplistic here:

I love the part about the Invisible Cosmic Housekeeper's Sexual Design. Logic says: If (S)he made TGBLT
naughty bits, surely (S)he would want one to use them?

AND as to "disordered sexual inclination" - personally I would be more inclined to apply that to the paedophiliac proclivities of the RC clergy themselves, wouldn't you?
Posted by Wisewebwoman at 3:31 PM