Golden Threads Among The Silver 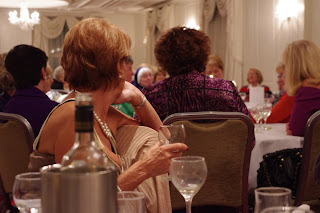 It was surreal, so many elements of life colliding, shattering, then coming together again and forming new entities. The gathering of individuals who, in most cases, had not seen each other in fifty years, having intensely shared each others' days for many years a half a century ago. What surprised me most was the glamour, the 4 inch heels, the blondenesses, the decolletés, the designer dresses, the perfect make-up, the Mediterranean tans. I must make it clear I do not fit into such a category. Not even close. I brought the LBD – my only dress, I hasten to add, and abandoned my high heels in Canada at the last minute and brought sandals instead and a sparkling trailing scarf.

Did we have fun? Amazingly so. What did we talk about? Our teachers, what we remembered about classes, how strict it was, how terrified we were of failure, the Irish economy (nobody of this group hurting as of yet) summer homes, travel. Some had already lost adult children, one was bald from chemotherapy, one was a nun with a startling turquoise dress, some memories of high school faces were erased by surgical interventions.

The class bully (I still bear the scars of one of her assaults on me) flew over from South Africa for the night, wealthy, handsomely bejewelled and sweepingly clothed in royal purple. There is no divine retribution. She was still being assiduously avoided by most of us. She finally gave up on swooping down on individual groups whose animation faded as she arrived and suspended their chatter until she moved on like some purple turkey buzzard plucking the innards out of a flock of starlings. Yet another validation of the old saw that we never change, try as we might.

One of the more attractive of our number was an Olympic runner who as a very young mother of three had competed in the Olympics. An extraordinary achievement for that day and age. A few had become medical doctors but gave up practices upon marriage. More than a few had gone back to school in their fifties and achieved post graduate degrees.

Shockingly, our science teacher was there. Eighty-eight years old. She had made a point of travelling from a science conference in Thurles to be with us for the night. She is still an active scientist along with being a nun.

The (lay) principal of our school addressed us and to say we were underwhelmed is to be kind. Mainly I was struck by the “Woo Factor” of my classmates. All still practising Catholics as evidenced by the devout prayer heads before and after the main meal. All, apart from the one unmarried, bearing their husbands' names. All with four or more children. The two who bore children outside wedlock all those years ago were still being gossipped about and speculations made as to subsequent relationships and progeny.

Do I feel odd amongst such creatures? I can honestly say no. I am old enough to be finally comfortable and unapologetic in my own skin and I would think loved enough by the classmates I have stayed in contact with. I am probably considered 'fierce odd' but I wear that designation as a badge of honour. I managed to escape the awful confines of rigidly Catholic Ireland and I feel I am all the better for it.

Ireland is lovely to visit. I love the seamless way I blend into “my people” - Irish social life and my Irish family.

But I am always so very happy to leave it all behind me when I go. For in my opinion, Ireland has changed so very, very little from when I lived there. And that is not a good thing at all.
Posted by Wisewebwoman at 1:32 PM