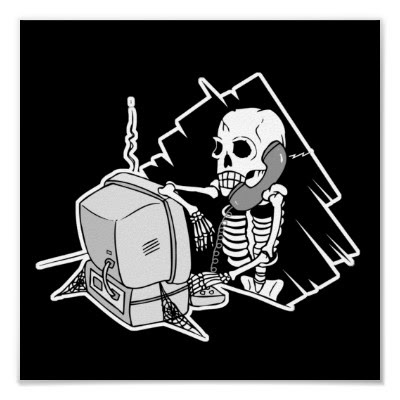 Both Nick and Ramana had recent posts on "Undesirables" and after commenting on both and offering examples, it suddenly hit me that the most appalling undesirable in my life is when I am talking to someone on the phone and they take another call expecting me to hold. Or interrupt me and announce "I have to take this other call" leaving me hanging. I also have call waiting (part of the telephone package I have, unfortunately) but the most important call is the one I'm on and I wouldn't dream of taking another call. Isn't it all about respect? I always hang up on such ignorance.

Another gripe is when I have a meeting with someone and they keep bouncing off to answer the phone and then have the gall to come back and say "Now where were we?" and before I can complete my answer, they bounce off again to take another inconsequential call (I hear their side of the phonecall, they are all trivial). I never answer the phone when I have company of any kind over. I consider it rude and every call can wait until my guest/client has left. I have got into the habit of bringing a book to such houses and reading while inwardly wanting to pack up and leave and maybe I should.

And isn't it an odd thing. I know atheists with absolutely no fear of death. The only ones who fear it are the religious. What happened to the promises of streets paved with gold on the other side and sitting at the right hand and pearly gates? Wouldn't so-called holy ones look forward to that? Embrace death, so to speak. Say: "At long last bliss!". But no. They "battle" it according to the obits. Sometimes a long, hard battle. Why?
Posted by Wisewebwoman at 8:30 PM