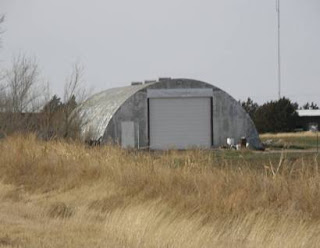 It took me a while to notice it, it blended so well into the snow-blanketed hill opposite my office window. It was the occasional spark off the grey sides of it that drew my attention, a brief reflection of the hide and seek sun on this winter day. A new barn I thought, what an odd place to put a shed, on top of a hill fully exposed to the elements of Newfoundland. Must be a newbie come from away. Doesn't know his or her arse from her elbow when it comes to outbuildings and their placements. Ha! I carried on working snorting to myself.

Odd that. I was gazing off into the distance over the hill, figuring out a plot point, a little character twist, when I could have sworn the shed moved. Maybe the owners realized it wasn't such a hot idea after all placing it way up high. It must be over a half kilometre to their house from there. If that indeed was their house below on the shoreline. There she goes again, she's moving fast now. Faster than a hundred people could move her. Even if they were running. And who'd run with a huge shed on their backs? And come to think of it, it wasn't really a shed was it, maybe one of those old galvanized post war buildings, what did they call them? Quonset huts, though hut this surely wasn't. Too sleek for that. The bit of sun coming out was really lighting the thing up now. Thing, did I just say thing? What the hell was it anyway? Oh my good gawd, would you look at that? She's taking off. Coming my way it looks like. She looks more like a circle now. A thick circle, she's spinning so fast, going right high over my house. Blocking out the peeping sun for a few seconds. Look at the birds scattering and squawking and hiding, and the bay all churned up from the force of the spinning overhead. And my dog cowering under my desk.

It's it amazing how disruptive a weather balloon can be?
Posted by Wisewebwoman at 10:12 AM