What kind of a world is this? 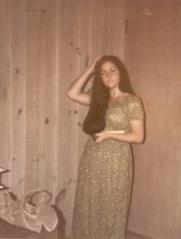 We are a sad, sad, species.

I have to question the sanity of us all when a helpless 19 year old girl moves far, far away from her family 50 years ago to give birth to a child "out of wedlock". Her parents and friends don't know about the pregnancy. It would be a cause of enormous shame and embarrassment. Girls who got pregnant without the sanctity of the ring around their fingers were sluts and the parents who gave birth to these sluts were shamed and often shunned. The tentacles and condemnation and judgement of the RC church was everywhere, even in Canada. Especially in Montreal.

So this 19 year old found an obscure town on a map of Ontario and gave birth in the local small town hospital and insisted on keeping the child. She had to fight to keep this baby as the chaplain and the holy sisters of the hospital were adamant in their lectures about the "child's best interests."

She left the hospital with the baby in a blanket and caught a bus to her rooming house and her money was running out so she asked around, in shops and the neighbourhood, about a private care home for the child and found one. She then secured a job in a nearby city. And commuted to her rooming house and paid the care home for the 5 day care of her daughter. She'd pick her up on Friday night and then spend the weekend with her. And this went on for 9 months, her life revolving around her job with its long hours, the minescule paycheques, the payment to the care home and her weekends with the baby.

And then, out of the blue, the temporary care parents took her to court. They said the child was upset at being disrupted every weekend. They didn't think the mother was fit. Their children were grown and gone. They could dedicate themselves to ensuring this child had a better quality of life than what this irresponsible single mother was offering.

And the 19 year old pleaded at the judge's bench she had to work to support the child, she saw her every chance she got, she was studying every night of the week after work so that the two of them could have a better life, maybe a live-in nanny.

Her tears and eventual sobs fell on deaf ears. The judge ruled in the care couple's favour and they could proceed with formally adopting the child. The mother was classified as unfit.

Years later, years and years, she reconnected with the child. The child refused to meet with her. Over and over and over again.

She said she would never, ever forgive her for "giving her up," even when she knew she was dying.

The other side of this story has never been written.

And I wish it was.

Posted by Wisewebwoman at 2:16 PM