Be Careful What You Read and When You Read It 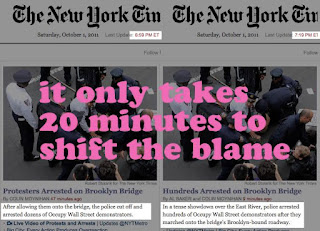 The supposedly grand old lady of newspapers, The New York Times, was caught with its knickers down today for the manner in which it framed the OWS demonstrations, subtly changing the language in the space of 20 minutes:

'changing the first line of a story about the Occupy Wall Street demonstrations. The change subtly shifted the blame for the mass arrest on the Brooklyn Bridge from the police to the protesters. In the first version of the story, police allowed them onto the bridge and then “cut off and arrested” them. In the second, there was a “showdown” in which demonstrators “marched onto the bridge.”'

Thanks to my friends at Sociological Images.

Read it here.
Posted by Wisewebwoman at 5:14 PM