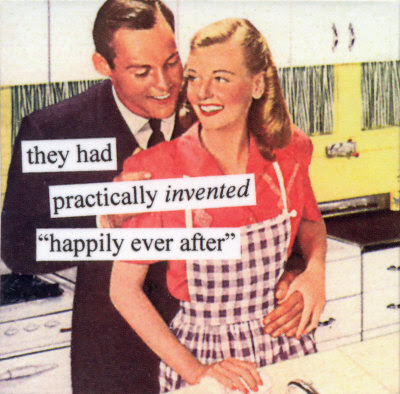 The fairytale aspect of life is presented ad nauseum both by books and films and TV shows. One of the primary sells being that the magic princess/prince will arrive, snow white charger optional, and whisk you into a life beyond your wildest dreams. Nightmare more like. At least for over 50% of us.

Case in point: Carol (not her real name) is a 40 year old woman living up the road from me. Attractive. Five children. Two husbands under her belt. Children by 3 different partners. None of whom give her a dime of support for her family's well-being. So we the people do it with our slim taxation dollars. Us 99% I am referring to, of course. I doubt if it crosses the 1%'s mind that such people exist. And if it did it would be “their own fault,” “bootstraps,” and “I'm alright, Jack”.

Nothing wrong with Carol and her life, though there are some that judge her. All the time. Her unhappiness leaks nearly every day from her Facebook posts. She is poorly educated and if you knew why, you would weep (snippet: as a toddler she saw her mother murdered in a bath of blood by her father). Her dream for the knight to ride in and save her has never left her mind since she was fourteen. She just made poor choices in the past, you see. But HE is still out there and will find her. Just like the soaps she watches in the afternoons. So she does herself up right sexy before she even opens her door and zeroes in on any available upright man who walks around. HE will be the one. It is a constant uphill struggle as sometimes they use and sometimes outright reject her. But her poverty and belief in this dream enables her to continue getting up in the morning.

It never crosses her mind to get an education now that all the children are in school full-time. To change. To determine that her happiness is an inside job. Not the knight's responsibility. I've spoken to her about this. About the joy of personal fulfilment and she looks at me sideways. This credo has absolutely no perceivable benefit to her. I just don't get it, you see.

How many countless others are waiting like her for this fantastical teevee land of Father Knows Best and its ilk?

No one talks about failure having much better odds than success in a relationship. And if we included the incredibly unhappy and abusive ones that manage to hold together in a kind of misery loves company toxicity, the odds would be overwhelming indeed.

Why does no one ever talk about limiting the size of their families in this overpopulated and abused planet - while we breed ourselves to the point of extinction? Children are being raised in poverty just about everywhere by single parents. Why? Because they believed in that Princ(ess) Charming and forever with a brood of happy kids frolicking in the meadow. Hell, if the sex is good than it follows that everyone and everything around us would be too, right?

I was one. The only lifestyle that improved after my divorce was that of my ex-husband. All sorts of both material and other benefits were cut from my two children's lives. I had bought into the dream too, you see. Like most of us. Forever and ever, amen.

What a crock of shyte as my people would say.

It is time we stopped this massive delusion.

So that Carol's children won't perpetuate the insanity.
Posted by Wisewebwoman at 11:30 PM