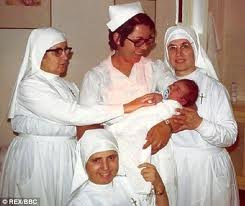 I was processing some papers for a dear Irish friend the other day. As I was reviewing the documentation in her file, I was struck once again by how the Irish government (and people) handed over all responsibility for medicine, education, registering of marriages and even the methodology of births (see here for my post on that) to the Catholic church. Shame on my government, shame on the brainwashed people who believed so unquestioningly in this cult. That abused everyone around them through massive cover-ups of their paedophilia and their funnelling of billions of wealth gained from such government-funded enterprises to their leader in the Vatican. And don't get me started on their tax-exempt status around the world.

And if you tell me about missionary work I will tell you that the poor unfortunate children in Africa and other Third World countries do not have access to lawyers or to courts that will hear them.

I am exhausted from all the exposed corruption in the last while as are the rest of you, I am sure. But this latest about Catholic priests, nuns and doctors stealing and selling as many as 300,000 babies in Spain for eager adoptive couples made my already sickened heart retch again. For those sad deceived mothers (shown the same frozen infant's body over and over again to convince them their baby had died) and for those lost babies, growing up outside their country, cultures and families.

Is there no depth to the depravity to which this wretched and corrupt organization won't sink?

Read more about it here.
Posted by Wisewebwoman at 11:21 PM