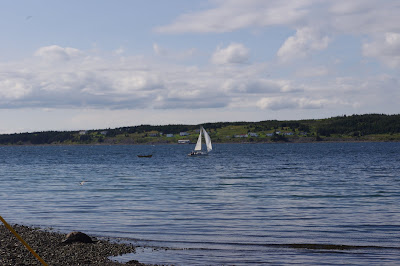 He thought to have one last sail on her before winter crept up on the dock. He'd have to put her away immediately after. Haul her up to the boathouse and wipe her all down. That should take care of the rest of the day.

It was October chilly, nothing that his thick aran sweater wouldn't handle and he'd tug the old wool watchcap tight over his head. Alone. That was why he got up so early, so no one could see him rowing the wee dory out to the boat, his Sleveen, and want to tag along. Now he was tying the dory on to the back of Sleveen so he could anchor just off the island of Colinet where his ancestors had settled back in the day. The island his grandparents had to leave in the sixties when Newfoundland had the massive resettlement programme. Poppy and Nan never got over it. They had their house towed by boat off the island and put it up again on the mainland. Facing the island that they loved so much for the rest of their days.

He remembered Poppy saying to Nan, every morning, "What's the weather like on Colinet today, Rose?" and she'd look over at the distant island and always answer: "Right easy over there, John, right easy."

They were buried there, on their island, and he wanted to visit them. So he did. Rowed in the wee dory up onto the beach below the old graveyard, carefully walking around the wide gaping hole where the old wooden church had been. Taking his cap off, in respect, when he stood in front of their gravestone, not praying exactly. But close.

He circled the bay a few times after, showing off a little, though he couldn't see anyone, it was still early, but you never knew who was looking out their windows. He'd always loved the way the Sleveen handled herself, no matter the wind, its speed or its direction, she bent into it, or danced in front of it, loving the lick of it, the slap of the water on her sides.

He should have felt sad. He'd anticipated it. Packed one of his old hankies in his back pocket just in case.

But he felt happy. The gulls shrieked overhead, the wind bit into his face as it puffed out the white sails against the blue sky above him, the ropes were easy on his hands. The Sleveen was riding right gentle today. As if she knew. And of course she did.

It would be the last time.

You might see Christmas, the surgeon said yesterday, as if he was handing him an early present.

What an enormous word.
Posted by Wisewebwoman at 12:16 AM