First One To Say It 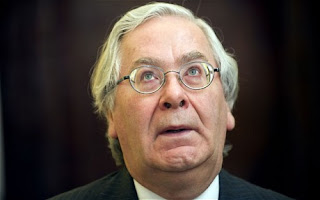 Hats off to Sir Mervyn King of the U.K. The first major politician to say: Yes folks, we're all fubared. The rest of the pols have all been hiding behind the Ministries of Disinformation long enough and it takes true guts to come out of the closet like the good Sir and tell it like it is. He's also giving us the possibility of no pensions and no savings. I'll repeat that: No pensions and no savings. I would add healthcare might be in jeopardy. You start pouring meaningless paper into a tanked economy and it might slow the fubar for a month or three but we are all facing the black chasm. No one is spared. Even up here in smug old Canada.

I love how he advises us all "to do the right thing".

As if the unregulated wankers who got us into this mess to begin with ever did or ever will.

"The world is facing the worst financial crisis since at least the 1930s “if not ever”, the Governor of the Bank of England said last night.
Sir Mervyn said the Bank had been driven by growing signs of a global economic disaster.

Sir Mervyn King was speaking after the decision by the Bank’s Monetary Policy Committee to put £75billion of newly created money into the economy in a desperate effort to stave off a new credit crisis and a UK recession.

Economists said the Bank’s decision to resume its quantitative easing [QE], or asset purchase programme, showed it was increasingly fearful for the economy, and predicted more such moves ahead.

Sir Mervyn said the Bank had been driven by growing signs of a global economic disaster.

“This is the most serious financial crisis we’ve seen, at least since the 1930s, if not ever. We’re having to deal with very unusual circumstances, but to act calmly to this and to do the right thing.”