Democracy and other Fantasies 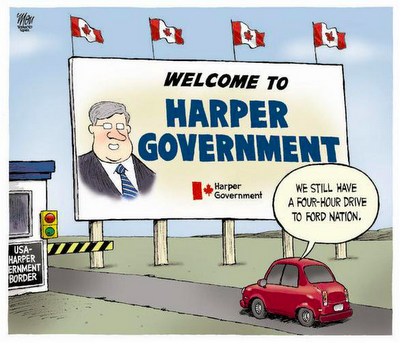 And for my friends outside Canada, Ford Nation refers to Toronto and its embarrassing and truly moronic mayor, Rob Ford.

We often look to the south of us here and point the finger as we pride ourselves on our free health care and the line from our national anthem - "The True North Strong and Free". Well, no more I can assure y'all.

For if ever there was a democracy or the semblance of one in Canada it has now vanished like the winter snow.

Here in Newfoundland the majority provincial government has put further muzzles on the press by extending the Official Secrets Act to include all cabinet discussion. Of any kind. There was a filibuster in the House of Assembly for 3 days as our brave little 'oppositions' (far too few) fought and fought. There was one notable standoff when the opposition called this new legislated secrecy act worse than the governments of most Third World Countries (he spoke the truth) and was held in contempt by the speaker. Seriously. There are many secret happenings going on in our provincial government here. Most notably a hydro dam project in Muskrat Falls which will destroy the aboriginal lands, put Newfoundland in debt for forty years (at least 8 billion dollars, and no one talks about overruns in these huge projects)give penny farthing rates to commercial enterprises and triple the hydro rates paid by us peons. So it is bleedingly obvious why fresh, tighter muzzles need to be applied and pages and pages of redaction from any papers released.

And federally we have the PM, Stephen Harper, rushing through an Omnibus Bill (much like our friends down south) which (amongst a huge, awful list) promises to trash the environment, ruin our fisheries, and remove health care from the neediest of our refugees who arrive here sick, sore and terrified. This is not the Canada I chose to become a citizen of. Harperland is more like it. And our own Premier of Newfoundland, Kathy Dunderdale, sits at his knees in worshipful adoration.

So there you have it. I haven't linked, there would be too many. It is an extremely depressing state of affairs.

So I concentrate on other, brighter things. Like a trip to Ireland. Further performances of my play here. Knitting a baby blanket. Going to my book club. Getting some work done. Reading. Writing. Walking. Taking photos. Watching whales.......
Posted by Wisewebwoman at 3:15 PM