Joke of the Week 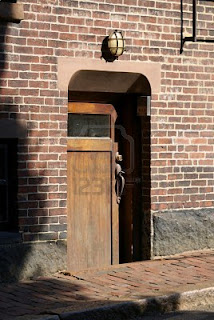 Three Irishmen are sitting in the pub window seat, watching the front door of the brothel across the road.

The local Methodist pastor appears, and quickly goes inside.

"Would you look at dat!" says the first Irishman.

"Didn't I always say what a bunch of hypocrites they are?"

No sooner are the words out of his mouth than a rabbi appears at the door, knocks, and goes inside.

"Another one trying to fool everyone with pious preaching and stupid hats!"

They continue drinking their beer roundly condemning the vicar and the rabbi when they see their own Catholic priest knock on the door.

"One of the girls must have died."


With hat tip to my ex-husband
Posted by Wisewebwoman at 10:29 AM